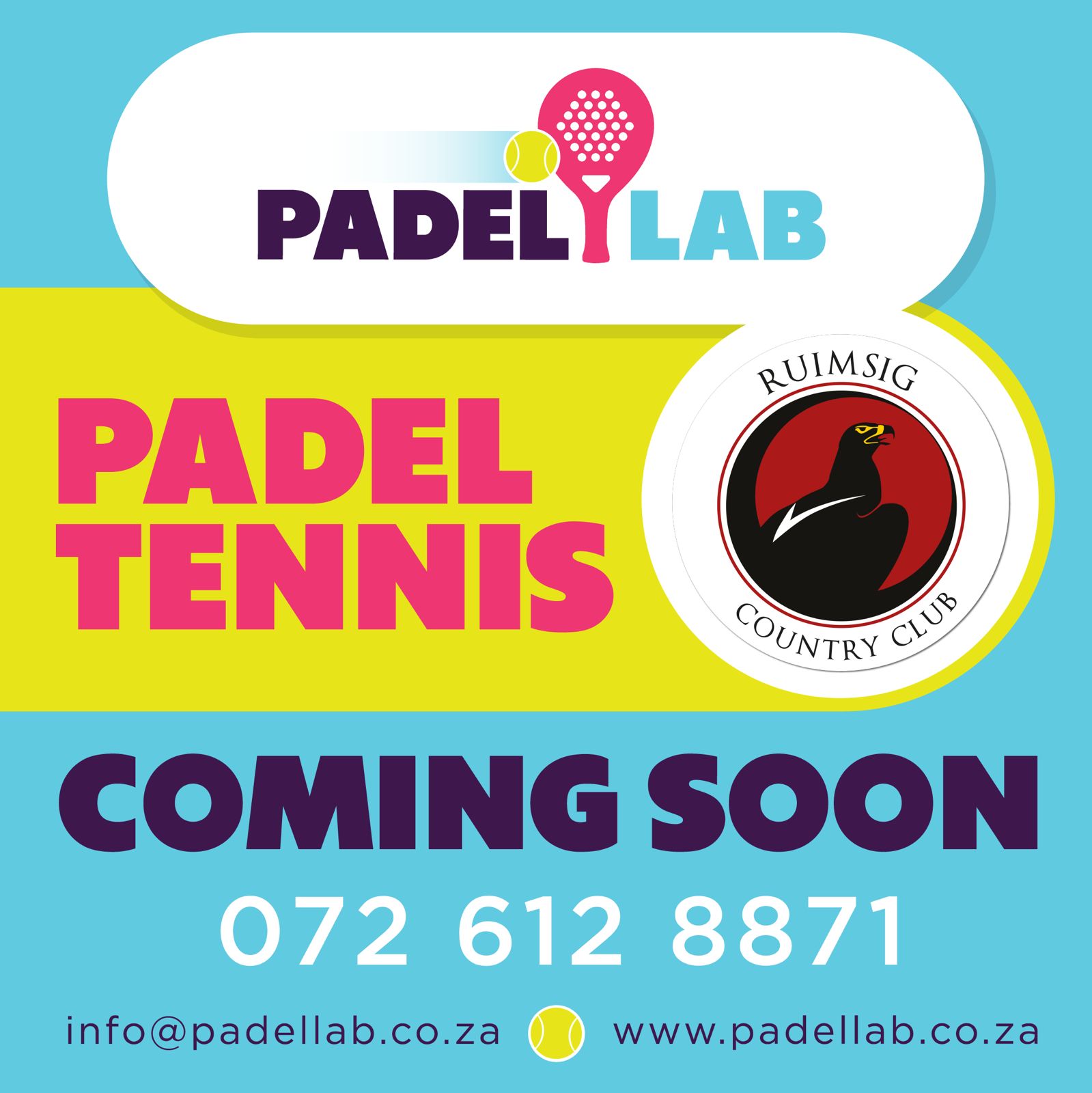 The first Padel Club is coming to the West Rand!

Padel Lab and Ruimsig Country Club have partnered up to bring the fastest-growing sport in the world to the Western suburbs of Johannesburg!

What is Padel Tennis?
Padel Tennis has been on the rise in South Africa over the past year. The sport stems from its sister sport of tennis, but the net is lower, the court is smaller, and there are no double lanes. Padel is typically played in doubles on an enclosed court roughly 25% smaller than the size of a tennis court. The main differences are that the court has walls and the balls can be played off them in a similar way as in the game of squash and that solid, stringless bats are used. The height of the ball being served must be at or below the waist level. Even though the format has singles games, the doubles format is predominantly the more popular format. The scoring method is the same as in tennis.

A Brief History of Padel Tennis
Padel tennis was introduced in Acapulco, Mexico, by Enrique Corcuera in 1969 when he adapted his Squash court at his home and included various elements of Platform Tennis which he called “Paddle Corcuera”. Enrique’s friend, Alfonso of Hohenlohe-Langenburg, played the new sport at Enrique’s home and loved it. He proceeded to create the first two Padel courts at a Tennis club in Spain in 1974 and he is considered the inventor of Padel. The sport is popular in Spain, Mexico, Italy and Andorra as well as several South American countries and it is spreading in many parts of Europe and North America.

So, Why Padel Tennis at RCC?
Padel Tennis is the fastest-growing sport globally; in South Africa, there are only a hand full of venues around the country and these cannot keep up with the demand. A number of RCC members have shown interest in this sport therefore, RCC decided to partner with Padel Lab (Powered by PadelTennisSA) to bring Padel to the club for its members and visitors to enjoy.

Padel Tennis has many benefits. As it can be played by all ages, it is a sport in which the whole family can participate including children from 7 years old and persons with disabilities. Family units are the foundation of society and the Club’s main focus for its growth and sustainability. This sport creates family bonding whilst having fun. It is a fairly simple sport with easy-to-understand-and-learn rules. Whether it is played socially or competitively it is a great cardio workout burning 600 calories in an hour. The rallies in Padel Tennis are ideally longer, making it a more action-packed sport. It is more sociable because the courts are smaller and conversation is easier. Padel Tennis is more about strategy than strength or power. Like most sports it helps eliminate stress, it improves coordination, it tones the muscles, it strengthens the heart, it fosters relationships, it promotes teamwork and it is a lot of fun!

We're not around right now. But you can send us an email and we'll get back to you, asap.